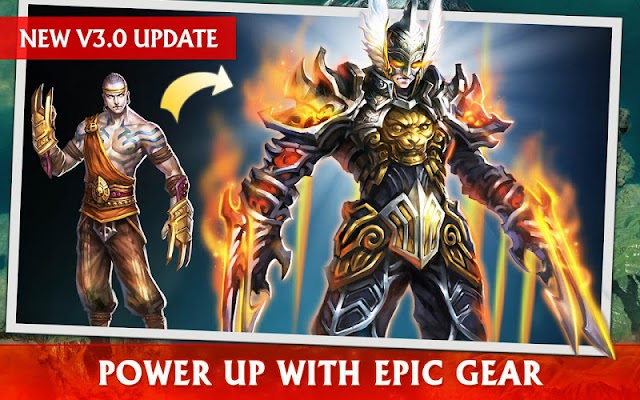 The most acclaimed action/RPG game returns with 3x the Heroes, 3x the Dungeons and 3x the Loot!!
As the last Demon Tower fell, the people of Northern Udar cheered their new hero. Their cheers, however, were short lived. Corrupted by demon magic, the last of the great Dragons unleashed a horrible evil upon the world by unsealing the Eternity Sword. Mawzok'Kahl, Lord of Hell, self-proclaimed Heir to the World, sets his sights on the kingdoms of Udar. And as suddenly as it came, it seems as though peace in Northern Udar has once again been snuffed out.

Northern Udar is in need of a hero once more, more now than ever! Every man, woman and child depends on it, they depend... on you.

THREE PLAYABLE HEROES
Will you fight as the rugged Warrior, the agile Monk, or the devastating Mage?

GUILDS AND REAL-TIME CHAT
Join forces in guilds, converse in real-time with other players and inspect their gear!
TOURNAMENTS
Compete in regular tournament events against other players and guilds
THREE KINGDOMS TO EXPLORE
Slay hordes of demons throughout the most distinct kingdoms in Udar!

THOUSANDS OF ITEMS TO LOOT
Will you find the most legendary items, or leave them to someone else?

Eternity Warriors 3 is free to play, but you can choose to pay real money for some extra items.
Use of this application is governed by Glu Mobile’s Terms of Use. Collection and use of personal data are subject to Glu Mobile’s Privacy Policy. Both policies are available at http://www.glu.com. Additional terms may also apply.

What's New
▶ New Event! Fight against the evil invading army, defeat the bosses with other players and earn soul shards for rare gear!
▶ Equip your character with all new wings with stats!
▶ Gather wing evolve materials by defeating raid bosses or trading shards in the Raid Boss Store!
▶ Explore 4 new dungeons in The Ivar Caverns and defeat the new boss!

This game has banner advertisements

You must use the obb I provided, or the mod not woking!!!