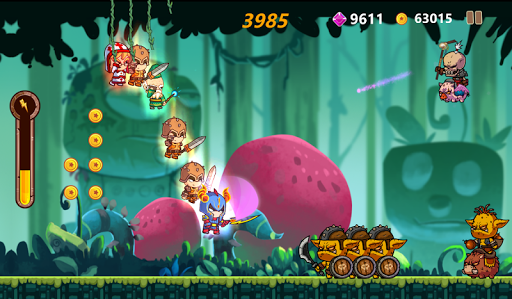 ::Required Android O/S:: 2.3+
*****Hack Description*****
*** [Mod Money] ***
**Credit To** "SNB"
:: Description::
Play the game to enjoy feeling of great adventure in an endless battle, fight against hundreds of deadly monsters, rescue other imprison heros with many kinds of magic and build the strongest team ever, try supper destroying power and live longer with free gem on the way!
Fantasy Fight is an endless run and simple game where you can use just 1 finger to control every kind of movement: run, jump, hang, attack, collect coins, power up…
This is a story where your brothers were kidnapped by enemies who released from the hell. You are as a hero in the mission to fight against monsters and rescue your brothers ? a non-stop and challenging battle. Don’t forget to collect coins on the way to active supper-power and kill all monsters once in just a second!
Every brother you rescue owns a unique magic that will help to strengthen your team. Remember, the more heroes you rescue, the more powerful your are!
It would be very difficult to both remain alive while have to help your brother escape, then gem and free gift always awaiting on the way, try to pick them up then you will be saved each time you fail to avoid the enemies.